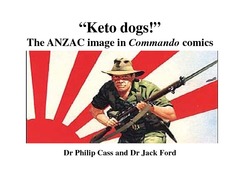 For generations of Australians and New Zealanders, Commando Comics have provided a consistent image of their people at war. Inevitably tall, bronzed and contemptuous of authority, their ability as warriors is such that their mere presence on the battlefield is enough to have the Germans crying “Donner und blitzen!” the Italians “Sapristi!” and the Japanese “Aieee!” How accurate is this depiction of Australians and New Zealanders? How well does a Scottish comic, often employing artists from Argentina and other countries, portray ANZACs? And what happens when Commando attempts to deal with historical issues such as the Land Wars? The answers to these questions also provide answers to larger questions. Drawing on work by Ross Laurie (2014), Maurico Castro and Alicia Decker (2012), Cord Scott (2011), Alexander Clarkson (2008) and Mel Gibson (2008)- and acknowledging the ongoing AHRC-funded project on comics and the world wars being carried out by Jane Chapman - this paper seeks to ask what function they perform as sources of history, creators of national imagery and ideas of soldiering.