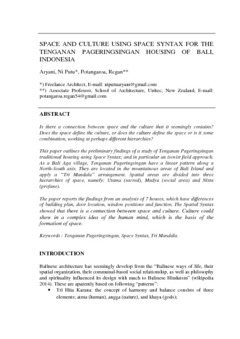 Is there a connection between space and the culture that it seemingly contains? Does the space define the culture, or does the culture define the space or is it some combination, working at perhaps different hierarchies? This paper outlines the preliminary findings of a study of Tenganan Pageringsingan traditional housing using Space Syntax; and in particular an isovist field approach. As a Bali Aga village, Tenganan Pageringsingan have a linear pattern along a North-South axis. They are located in the mountainous areas of Bali Island and apply a “Tri Mandala” arrangement. Spatial areas are divided into three hierarchies of space, namely: Utama (sacred), Madya (social area) and Nista (profane). The paper reports the findings from an analysis of 7 houses, which have differences of building plan, door location, window positions and function. The Spatial Syntax showed that there is a connection between space and culture. Culture could show in a complex idea of the human mind, which is the basis of the formation of space.