Are we listening, are we learning? 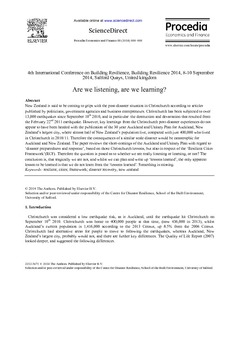 New Zealand is said to be coming to grips with the post-disaster situation in Christchurch according to articles published by politicians, government agencies and business entrepreneurs. Christchurch has been subjected to over 13,000 earthquakes since September 10th 2010, and in particular the destruction and devastation that resulted from the February 22nd 2011 earthquake. However, key learnings from the Christchurch post-disaster experiences do not appear to have been heeded with the publication of the 30 year Auckland and Unitary Plan for Auckland, New Zealand’s largest city, where almost half of New Zealand’s population live, compared with just 400,000 who lived in Christchurch in 2010/11. Therefore the consequences of a similar scale disaster would be catastrophic for Auckland and New Zealand. The paper reviews the short-comings of the Auckland and Unitary Plan with regard to ‘disaster preparedness and response’, based on those Christchurch lessons, but also in respect of the ‘Resilient Cities Framework’(RCF). Therefore the question is posed as to whether we are really listening or learning, or not? The conclusion is, that tragically we are not, and whilst we can plan and write up ‘lessons learned’, the only apparent lesson to be learned is that we do not learn from the ‘lessons learned’. Something is missing.