Why Isn't it working? The Rise and Fall of the Financial Assistance Package in the Repair of Leaking Buildings within New Zealand. 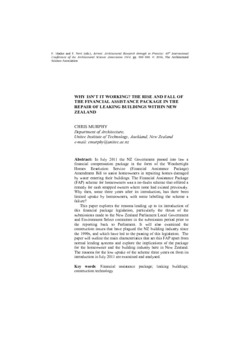 Murphy, C.P. (2014). Why Isn't it working? The Rise and Fall of the Financial Assistance Package in the Repair of Leaking Buildings within New Zealand. In F. Madeo and F. Novi (eds.) [Proceedings of] Across: Architectural Research through to Practice: 48th International Conference of the Architectural Science Association, Genoa, Italy, Dec 10-13, 2014(Ed.),

In July 2011 the NZ Government passed into law a financial compensation package in the form of the Weathertight Homes Resolution Service (Financial Assistance Package) Amendment Bill to assist homeowners in repairing homes damaged by water entering their buildings. The Financial Assistance Package (FAP) scheme for homeowners was a no-faults scheme that offered a remedy for cash strapped owners where none had existed previously. Why then, some three years after its introduction, has there been limited uptake by homeowners, with some labelling the scheme a failure? This paper explores the reasons leading up to its introduction of this financial package legislation, particularly the thrust of the submissions made to the New Zealand Parliament Local Government and Environment Select committee in the submission period prior to the reporting back to Parliament. It will also examined the construction issues that have plagued the NZ building industry since the 1990s, and which have led to the passing of this legislation. The paper will outline the main characteristics that set this FAP apart from normal lending systems and explore the implications of the package for the homeowner and the building industry here in New Zealand. The reasons for the low uptake of the scheme three years on from its introduction in July 2011 are examined and analysed.