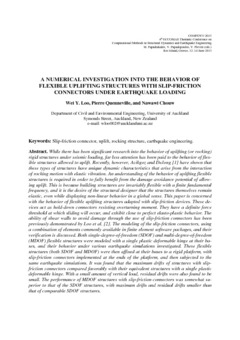 While there has been significant research into the behavior of uplifting (or rocking) rigid structures under seismic loading, far less attention has been paid to the behavior of flexible structures allowed to uplift. Recently, however, Acikgoz and DeJong [1] have shown that these types of structures have unique dynamic characteristics that arise from the interaction of rocking motion with elastic vibration. An understanding of the behavior of uplifting flexible structures is required in order to fully benefit from the damage avoidance potential of allowing uplift. This is because building structures are invariably flexible with a finite fundamental frequency, and it is the desire of the structural designer that the structures themselves remain elastic, even while displaying non-linear behavior in a global sense. This paper is concerned with the behavior of flexible uplifting structures adapted with slip-friction devices. These devices act as hold-down connectors resisting overturning moment. They have a definite force threshold at which sliding will occur, and exhibit close to perfect elasto-plastic behavior. The ability of shear walls to avoid damage through the use of slip-friction connectors has been previously demonstrated by Loo et al. [2]. The modeling of the slip-friction connectors, using a combination of elements commonly available in finite element software packages, and their verification is discussed. Both single-degree-of-freedom (SDOF) and multi-degree-of-freedom (MDOF) flexible structures were modeled with a single plastic deformable hinge at their bases, and their behavior under various earthquake simulations investigated. These flexible structures (both SDOF and MDOF) were then affixed at their bases to a rigid platform, with slip-friction connectors implemented at the ends of the platform, and then subjected to the same earthquake simulations. It was found that the maximum drifts of structures with slip- friction connectors compared favorably with their equivalent structures with a single plastic deformable hinge. With a small amount of vertical load, residual drifts were also found to be small. The performance of MDOF structures with slip-friction connectors was somewhat superior to that of the SDOF structures, with maximum drifts and residual drifts smaller than that of comparable SDOF structures.