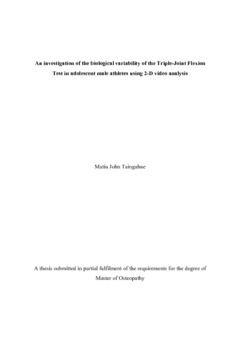 Taingahue, M.J. (2015). An investigation of the biological variability of the Triple-Joint Flexion Test in adolescent male athletes using 2-D video analysis. An unpublished thesis submitted in partial fulfilment of the requirements for the degree of Master of Osteopathy. Unitec Institute of Technology.

BACKGROUND: Movement screening has become standard practice in a range of sports injury settings, however, few standardised protocols have undergone rigorous testing, and the biological variability in athletes’ performance has seldom been investigated or discussed in the movement screening literature. AIM: to investigate the intra-athlete within- and between-session variability of the Triple-Joint Flexion Test (TJFT) in adolescent, development-level, court and field sport athletes. DESIGN: video-based, repeated-measures. METHODS: Two-dimensional video rating and kinematic analyses were performed on simultaneous front and side views of 17 uninjured, male, adolescent athletes (mean ± SD age = 16.9 ± 0.9 years) performing 6 repetitions of the TJFT; and 14 athletes who repeated the TJFT 24h later. Two digital cameras (Panasonic HC-V520M) and video analysis software (PnO Data Solutions, CA, United States) were used to capture, synchronise and analyse the images. Intraclass correlation coefficients (ICC) and typical errors (TE) were used to assess within- and between-day reliability of all variables. Friedman’s and Wilcoxon signed-rank tests were used to check for systematic changes in rating score within- and between-sessions. RESULTS: The within-session reliability of rating scores (TE 1.5 to 0.7 pts, ICC 0.14 to 0.87) and frontal plane kinematic variables (TE 15 to 3°, ICC -0.11 to 0.88) ranged from ‘poor’ to ‘excellent’ for the individual movement tests (TE 0.7 to 1.5 pts, and 3 to 15°, ICC 0.14 to 0.87, and -0.11 to 0.88), but the within-session reliability of the sagittal plane flexion angles was ‘good’ to ‘excellent’ for all movement tests (TE 1 to 7°, ICC 0.60 to 0.97). The between-session reliability of rating scores (TE 0.8 to 0.5 pts, ICC 0.62 to 0.98) and kinematic variables (TE 8 to 1°, ICC 0.30 to 0.88) were predominantly ‘good’ to ‘excellent’ for all tests. No significant systematic changes were observed in rating score within- or between-sessions for any of the tests. CONCLUSIONS: These results suggest the TJFT could be clinically useful for monitoring lower limb function in adolescent athletes. The need for further investigation of movement variability associated with performance, scoring and interpretation of movement screening tests is also highlighted.