Getting women on boards 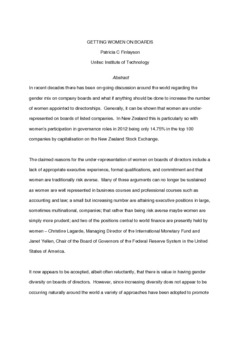 In recent decades there has been on-going discussion around the world regarding the gender mix on company boards and what if anything should be done to increase the number of women appointed to directorships. Generally, it can be shown that women are under- represented on boards of listed companies. In New Zealand this is particularly so with women’s participation in governance roles in 2012 being only 14.75% in the top 100 companies by capitalisation on the New Zealand Stock Exchange. The claimed reasons for the under-representation of women on boards of directors include a lack of appropriate executive experience, formal qualifications, and commitment and that women are traditionally risk averse. Many of these arguments can no longer be sustained as women are well represented in business courses and professional courses such as accounting and law; a small but increasing number are attaining executive positions in large, sometimes multinational, companies; that rather than being risk averse maybe women are simply more prudent; and two of the positions central to world finance are presently held by women – Christine Lagarde, Managing Director of the International Monetary Fund and Janet Yellen, Chair of the Board of Governors of the Federal Reserve System in the United States of America. It now appears to be accepted, albeit often reluctantly, that there is value in having gender diversity on boards of directors. However, since increasing diversity does not appear to be occurring naturally around the world a variety of approaches have been adopted to promoteit ranging from specifically imposed quotas to monitoring systems operated by the various bourse. Two interrelated obstacles to progress which have been identified are the “old boys’ network” and the lack of vacancies due to the slow pace of turnover of directors on boards. A further concern is that women tend not to put themselves forward for appointment. In New Zealand the government is committed to taking a leading role in establishing a better gender balance on boards and committees for which it makes appointments. Without such initiatives the journey towards better balanced boards would be a long and slow one.