Embedding indigenous knowledge in the crowded space of a tertiary institution 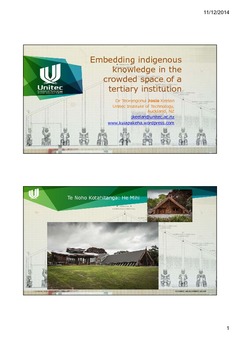 In keeping with the tradition of my people I acknowledge the indigenous people of Australia, and their ancestors all of whom have maintained the spirit of the land through the generations and will continue to do so going forward. I acknowledge other indigenous people who have travelled to the conference from the four winds. And I acknowledge there will be those at the conference who would challenge the notion of who indigenous people are. So for my purposes in the presentation, I will be referring to those who had the first communion with the land; who made the first lores and laws; who spoke the first language of the land; who designed the first cultures; who built the first abodes; who first interacted with the native flora and fauna; whose blood was first spilt on the land; who created the first learning systems; whose struggle today is to be heard when the noise of ‘the other’ is so loud it leaves no room for anyone else. Embedding indigenous knowledge into curriculum that does not have its foundation in that knowledge is a challenge many indigenous groups around the world face when invited and being allowed into the tertiary space usually after some time fighting for that right. The challenge being faced extends to the delivery of student support services and the governance and management, processes and practices of the tertiary institution. The issue is one of demonstrating the relevance of indigenous knowledge in a multicultural context where the dominant culture believes their knowledge system delivers to all when evidence clearly shows this not to be the case. The intent in this presentation is to demonstrate that when an effort is made to improve the delivery of services to indigenous students, all students benefit. The presentation will focus on Māori students in Aotearoa New Zealand and the work being done at Unitec Institute of Technology (Unitec) to embed mātauranga Māori (Māori knowledge) in curriculum and the way in which the Institute does its business. Student support services are seen as an integral part of that conversation rather than separate from it. In 2010 Unitec adopted a Māori Success Strategy with implementation of that strategy beginning in 2011. The investment in that strategy is beginning to show results. The next challenge for the Institute will be in maintaining those outcomes once the official success, retention and completion statistics, which are the only measures government is interested in, have reached parity with non-Māori. The presence of international students is one of the many ways in which challenges to the inclusion of indigenous knowledge is presented. That is, indigenous knowledge is of no relevance to international students because they want a course of study that is the same as that which is available elsewhere in the world – a rather limiting idea of what education is about nevertheless an argument I have heard many a time from non-Māori. The reply to such a challenge is that international students can benefit hugely from the indigenous theories, models and frameworks. Additionally, the inclusion of indigenous knowledge can challenge their perceptions of the world and often strengthens their own identity. It can of course also challenge their own and their country’s ideological stand on the place of indigenous people and that can be scary. There are ways in which Māori knowledge is being made available to international students other than in the classroom and at least one case study on how a university in Auckland is doing this will be presented. The presentation therefore is about ways of moving forward whilst acknowledging the barriers that exist. Tihe mauriora (I sneeze and therefore I am)!