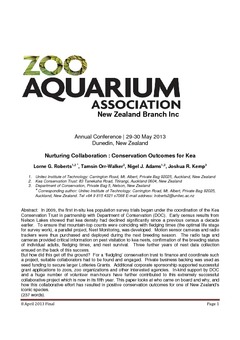 In 2009, the first in-situ kea population survey trials began under the coordination of the Kea Conservation Trust in partnership with Department of Conservation (DOC). Early census results from Nelson Lakes showed that kea density had declined significantly since a previous census a decade earlier. To ensure that mountain-top counts were coinciding with fledging times (the optimal life stage for survey work), a parallel project, Nest Monitoring, was developed. Motion sensor cameras and radio trackers were thus purchased and deployed during the next breeding season. The radio tags and cameras provided critical information on pest visitation to kea nests, confirmation of the breeding status of individual adults, fledging times, and nest survival. Three further years of nest data collection ensued on the back of this success. But how did this get off the ground? For a ‘fledgling’ conservation trust to finance and coordinate such a project, suitable collaborators had to be found and engaged. Private business backing was used as seed funding to secure larger Lotteries Grants. Additional corporate sponsorship supported successful grant applications to zoos, zoo organizations and other interested agencies. In-kind support by DOC and a huge number of volunteer man-hours have further contributed to this extremely successful collaborative project which is now in its fifth year. This paper looks at who came on board and why, and how this collaborative effort has resulted in positive conservation outcomes for one of New Zealand’s iconic species.