Can models be used successfully to mimic the real thing to prevent canine predation of an endangered species? 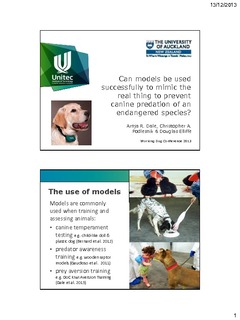 Dogs pose a significant threat to kiwi (Apteryx spp.) through predation. In an attempt to balance kiwi conservation and the need for dogs to be used for hunting purposes in kiwi habitat, the New Zealand Department of Conservation developed the Kiwi Aversion Training (KAT) programme. KAT is a canine aversion training programme which uses models rather than using live kiwi which aims to stop dogs killing kiwi. ‘Kiwi-safe’ permits are issued after a short training session where dogs receive a brief period (0.5-1.5s) of aversive electrical stimulation from an electric shock collar when interest is displayed towards the kiwi models. Despite models being commonly used when training and assessing animals, for example in canine temperament testing, in predator awareness training and for prey aversion training; there has been no systematic evaluation about their effectiveness. This research investigates whether models mimic the real thing using the KAT protocol and then presenting the dogs with a live bird one month later. Chickens were used rather than kiwi due to their widespread availability. 84 dogs were trained to avoid a chicken model and then presented with a live chicken one month later at a novel location with novel dog handlers. There were five chicken models used and dogs were randomly allocated in to one of seven treatment groups: (1) dead chicken; (2) stuffed chicken; (3) chicken faecal material; (4) chicken nesting material; (5) wooden cut-out chicken; (6) all chicken models together; (7) a live chicken. These models were selected for investigation because they comprise the range of the training stimuli used by the various trainers in the KAT programme, but with kiwi equivalents (Groups 1-6 only). Behaviours towards the live chicken were quantified, as was the time and distance taken to detect the chicken when it was presented. The majority of the test dogs did not generalise from the chicken models to the live chicken potentially indicating that some of the models did not mimic the real thing and were not ecologically significant to the dogs. It is recommended that the use of models is questionable for one-off aversion training sessions, and needs further study.