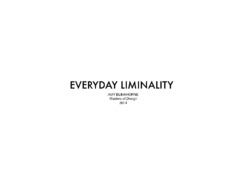 Blinkhorne, A. (2014). Everyday liminality. [An unpublished research project submitted in partial fulfilment of the requirements for the degree of] Masters of Design, Unitec Institute of Technology.

This painting project commenced through the activity of re-examining my previous practice, which prompted the desire to focus on the activity of painting through the plasticity of oil paint. The intention to focus on material was also a way of developing a broader visual language in order to investigate the spatial dynamic within a painting practice. The interest in alternative visual perceptions and Renaissance perspective sparked this projects’ research question; How to create a sense of liminal space through investigating the western notions of perspective. Western one-point perspective is a representation of the common binocular vision, seen from a single view point to depict scenes as though seen through two eyes. Alongside studying the visual language used to employ perspective, this project touches on the main Western points of view through the enlightenment of rationalism that influenced the time. The intention to understand the systems of traditional Western perspective to invert these strategies established the foundations of this painting practice to create a sense of liminal space. An interest in altered perception was sparked by a review about Oliver Sacks book, The Minds Eye, featured in CMAJ, Feburary 21, 2012. It contains examples and case studies looking at the idea of seeing, of patients who experience a diverse range of perceptual conditions. I was particularly interested in exploring different ways of seeing, from the point of view that vision is crucial to my everyday experience and engagement. These case studies written by neurologist and author, Oliver Sacks were used to guide visualisations of various spatial perceptions. In What Hallucination Reveals about our Mind Sacks specifically focuses on Charles Bonnet Syndrome, which generates a form of hallucination that mimics perception due to the sudden hyper stimulation of the brain after the absence of visual or auditory signals. Bonnet referred to it being, “…the theatre of the mind generated by the machinery of the brain.” The differentiation between hallucination and imagination is that imagination is under voluntary control; hallucination is not. ... The concepts of Liminality and Limbo were initially seen as one and the same, an in-between space. While they are both in-between spaces, Limbo is a state of suspension, a waiting place that can’t shift until a decision is made from the outside. It is described by Roman Catholic Theology as a no-man’s land, between heaven and hell where unbaptised infants are suspended between states of belonging. A Liminal space questions the construct of plural or multiple states until it becomes a construct itself by which another liminal space is created, it is therefore a constant state of becoming. Through this clarification liminality was seen as a more interesting field of investigation to build a conceptual framework for this project, interlinking with a visual language that inverts the traditional western systems of perspective.