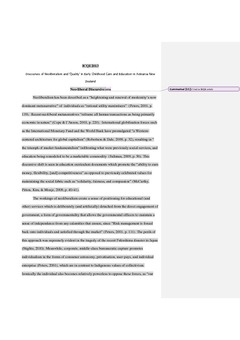 Skerrett, M., Ritchie, J., and Rau, C. (2013). Neoliberalism and Discourses of ‘Quality’ in Early Childhood Care and Education in Aotearoa New Zealand. Paper presented at Paper presented at the The Ninth International Congress of Qualitative Inquiry, University of Illinois at Urbana-Champaign, USA. May 15-19.

In order to proceed to unveil the impact of neoliberal policies on early childhood care and education in Aotearoa New Zealand, we have considered it preliminarily necessary to investigate our historicity, identifying the whakapapa/geneology of the discursive power effects underpinning relationships between the Indigenous Māori and the colonisers of Aotearoa. This article firstly demonstrates the use of critical historical discourse analysis as a form of counter-colonial resistance, backgrounding discourses prevalent in Aotearoa since colonisation, that now underpin the current context in which the neoliberal enterprise impinges on our lives. This is followed by an uncovering of the multiple and conflicting lines of flight arising in the process of implementation of the “bicultural” national early childhood care and education curriculum, Te Whāriki , in the 15 years since it was promulgated, with a particular focus on the ways in which neo-liberalism has reconfigured the early childhood landscape. The past 25 years have seen a resurgence of Māori voice within the education sector and elsewhere in Aotearoa. The article also focuses on how our research methodology builds on ways in which Māori have transgressed striated spaces, reclaiming their positioning as indigenous partners alongside the descendents of the colonisers, creating smooth spaces in which to reassert their desires, ways of being, and knowing.