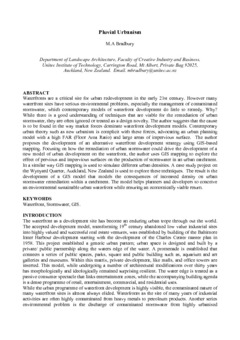 Waterfronts are a critical site for urban redevelopment in the early 21st century. However many waterfront sites have serious environmental problems, especially the management of contaminated stormwater, which contemporary models of waterfront development do little to remedy. Why? While there is a good understanding of techniques that are viable for the remediation of urban stormwater, they are often ignored or treated as a design novelty. The author suggests that the cause is to be found in the way market forces dominate waterfront development models. Contemporary urban theory such as new urbanism is complicit with these forces, advocating an urban planning model with a high FAR (Floor Area Ratio) and large areas of impervious surface. The author proposes the development of an alternative waterfront development strategy using GIS-based mapping. Focusing on how the remediation of urban stormwater could drive the development of a new model of urban development on the waterfront, the author uses GIS mapping to explore the effect of pervious and impervious surfaces on the production of stormwater in an urban catchment. In a similar way GIS mapping is used to simulate different urban densities. A case study project on the Wynyard Quarter, Auckland, New Zealand is used to explore these techniques. The result is the development of a GIS model that models the consequences of increased density on urban stormwater remediation within a catchment. The model helps planners and developers to conceive an environmental sustainable urban waterfront while ensuring an economically viable return.