Panoptic reality : a review of Citizenfour 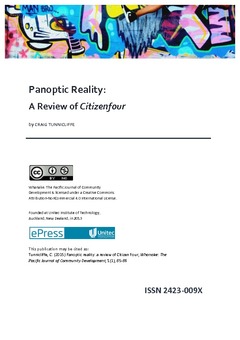 Movies, and perhaps more importantly documentary movies, need to be separated into good documentaries and important documentaries. Citizenfour would then fall squarely in this second category, and require viewing for its import rather than its simulation. Citizenfour documents the days preceding and during the release of information gained by Edward Snowden, which exposed the depth of surveillance activities conducted by the NSA and other security agencies. Directed by Laura Poitras and reporting by Glenn Greenwald, the film documents the process of information release, the technological capability of the spying agencies, and the person (Snowden) behind the release of this information. ...This film and its subject matter are important. They highlight the reality of information accessibility, the surveillance that is currently occurring, the scope and depth of this activity, and government’s complicity in this activity. Jeremy Bentham described a perfect prison where those who thought they were being watched modified their behaviour accordingly. Snowden, facilitated by Poitras and Greenwald, demonstrates in Citizenfour that this prison has already been built, and is present every time we log on to a computer system. For those involved in social change, a risk is that the threat of observation may change behaviour. This needs to be resisted.

Whanake: The Pacific Journal of Community Development is licensed under a Creative Commons Attribution-NonCommercial 4.0 International License.