Art into Nature: Elementalism in Contemporary Public Art and Architecture 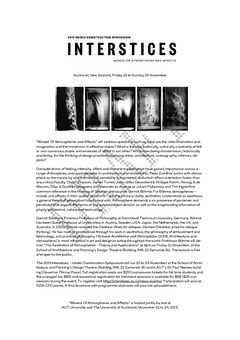 In the study of ancient or pagan thought, the term “elementalism” is sometimes used to refer to the personification of nature’s elements — for example, the belief in the existence of a god of wind or god of fire. Conversely there is a new elementalism at work in contemporary art. Recent artists have pursued - often in public works - atmospheric manipulations of elemental effects: clouds, sky, air, water, light, or smoke. Common in contemporary artists such as Olafur Eliasson, Roni Horn, and Rachel Whiteread, is a reductivist approach that strips aesthetic objects down to phenomenal essences. A similar tendency can be seen in contemporary architecture, with Diller+Scofidio’s Blur building (2002) being a notable example. If the Crystal Palace of 1851 is said to be the first building in the world in which “atmosphere is perceptible” (Merrifield), the Blur project subtracts the built almost entirely in favour of elemental effects. Gernot Böhme (1993) has suggested that the idea of atmosphere can serve to supersede foundational Western conceptions of the aesthetic that are founded in subject/object distinctions (experiencing atmosphere doesn’t require one to be a subject counterpoint- ed against an object). Recent elementalist works could be said to stage precisely such a superseding of classical aesthetics through their dissolution of art or architecture into nothing but atmosphere. Replacing aesthetic objects and subjects apprehending them are fields of affect. My primary interest in such works, however, is that this dematerialization of the aesthetic object is more than a dissolution into affect — it is also a dissolution into nature. The Art-Nature distinction is – alongside the subject-object distinct – one of the key premises of Western thought. Kant long ago held that, whereas nature is the realm of mere ungoverned effects (effectus), art is the deliberate human transformation of such arbitrary effects into determined objects ensouled by reason and meaning. The Art- Nature distinction therefore endorses the Subject-Object distinction and shores up the supposed superiority of the former over the latter. Recent elementalist works ignore this classical policing of the line between art and nature. Many contemporary artists apparently want their works to approach the ostensible indeterminateness of nonhuman nature. The dissolution of the object into atmosphere and affect thus seems to imply a ‘naturalization’ of art — perhaps a dehumanization, or perhaps a post-humanism? This paper explores the idea that, in their annulment of the art-nature distinction by means of elemental atmospherics, the new elementalists might also be intuitively con- ducting an advanced kind of posthumanist naturphilosophie.