Social Media and Online Activism in Kazakhstan: A New Challenge for Authoritarianism 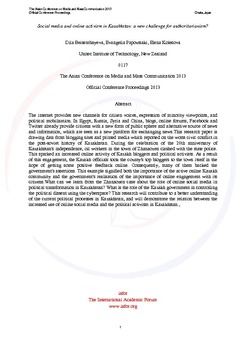 The internet provides new channels for citizen voices, expression of minority viewpoints, and political mobilisation. In Egypt, Russia, Syria and China, blogs, online forums, Facebook and Twitter already provide citizens with a new form of public sphere and alternative source of news and information, which are seen as a new platform for exchanging news.This research paper is drawing data from blogging sites and printed media which reported on the worst civic conflict in the post-soviet history of Kazakhstan. During the celebration of the 20th anniversary of Kazakhstan's independence, oil workers in the town of Zhanaozen clashed with the state police. This sparked an increased online activity of Kazakh bloggers and political activists. As a result of this engagement, the Kazakh officials took the county's top bloggers to the town itself in the hope of getting some positive feedback online. Consequently, many of them backed the government's assertions. This example signified both the importance of the active online Kazakh community and the government's realisation of the importance of online engagement with its citizens.What can we learn from the Zhanaozen case about the role of online social media in political transformation in Kazakhstan? What is the role of the Kazakh government in controlling the political dissent using the cyberspace? This research will contribute to a better understanding of the current political processes in Kazakhstan, and will demonstrate the relation between the increased use of online social media and the political activism in Kazakhstan

160606 Government and Politics of Asia and the Pacific, 200102 Communication Technology and Digital Media Studies