Talking past each other? : A comparative study of the descriptions of the Russo-Japanese War in Japanese and Russian history textbooks, ca. 1997-2010 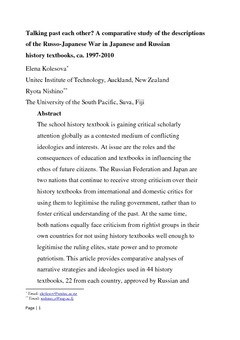 Kolesova, E., and Nishino, R. (2013). Talking past each other? : A comparative study of the descriptions of the Russo-Japanese War in Japanese and Russian history textbooks, ca. 1997-2010. Paper presented at Japanese Studies Association of Australia Conference: Cities, Nature and Landscape: From Nara to the Networked City. ANU, Canberra, Australia

History textbooks help us to understand not only the country’s past but its present as well. They contribute towards developing historical memory and identity formation. They equally influence perceptions about other countries and constitute a powerful force in the way nations conceptualize and manage external relations. In the pursuit of a common regional identity, European scholars and academics have attempted to overcome mutual misrepresentations in textbooks by writing common textbooks for two or more neighbouring countries. A similar initiative occurred in East Asia where Japan, China and Korea have issued a tri-nation history textbook as a counter-balance to officially sanctioned textbooks. This analysis is devoted to a less discussed, but no less significant, diplomatic relation in East Asia, that of Japan and Russia. Japan and the Russian Federation are two nations that continue to face strong criticisms on history textbooks from international and domestic critics for using them to legitimise the ruling government, rather than to foster critical understanding of the past. At the same time, both nations equally face criticism from rightist groups in their own countries for not using history textbooks well enough to legitimise the ruling elites, state power and to promote patriotism. This presentation provides comparative analyses of ideologies used in Japanese and Russian textbooks, approved by Russian and Japanese Ministries of Education between 1997 and 2010, taking as a case study military conflicts between Japan and Russia over the last one hundred years. By shifting away from a more traditional textbook analysis that focuses on stereotypes and enemy images in textbooks, and a general framing of views on ‘self’ and ‘other’ to the discourse analysis, this enables us to reveal the hidden ideologies conveyed in these textbooks. The relations between Japan and Russia may not appear as ‘hot’ as Japan’s relations with other East Asian nations, or Russia with former East-European states or former Soviet Republics. The residual Cold War dynamics and unresolved territorial disputes of the Kurile Islands, as they are called in Russia, or Hoppô Ryodô in Japanese (‘Northern territories’), preoccupy the agenda despite growing trade between Japan and the Russian Far East. By choosing mutual representation during the direct military conflicts between the two nations, this study may help us to better appreciate the legacy of the ambivalent relations. It also helps us to understand textbook ideologies in both countries and the influence of such ideologies on collective memory and national identity