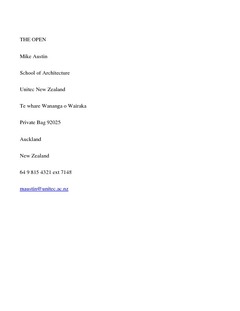 Recently there has been a renewed interest in Karl Popper’s The Open Society, written during the Second World War in Christchurch. Popper also wrote another major book The Poverty of Historicism, which has been much debated. The history of architecture revolves around the notion of closure. It is concerned with shelter, protection and differentiation. A history of openness in architecture has yet to be written. It does not see origins in the forest or the primitive hut but instead in the ocean and the boat. Open architecture is not concerned with closed rooms courtyards or squares. It is instead about platforms, decks, terraces, and beaches. However in the period of global expansion, the extent of oceanic and continental geography provoked confrontation with the phenomenon of the open. Hodges, the artist on Cook’s first voyage, continued to be confounded by the aesthetic appeal of Pacific and Asian architecture which couldn't be explained by reference to the architectural canon of ancient Greece. Oceanic societies lived in a way that contradicted traditional European architecture. In the extreme case aboriginal architecture was seen as non-existent. This architecture of the new world introduced the notion of the open and provoked the introduction of the modern. The skyscraper, the suburb, the freeway are new world examples of open architecture. The negatives of openness are well known; the boredom of suburbs the waste of the freeway and the banality of the skyscraper city. However the outcomes are sometimes sublime. The architecture of openness endlessly strives for porosity, connection, or view, rather than enclosure, shelter, or containment. The positive story to be written is about the achievement of openness.