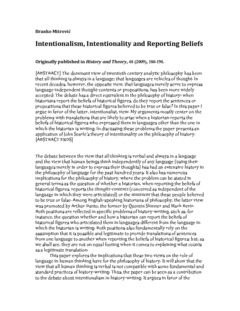 The dominant view of twentieth century analytic philosophy has been that all thinking is always in a language; that languages are vehicles of thought. In recent decades, however, the opposite view, that languages merely serve to express language-­‐independent thought-­‐contents or propositions, has been more widely accepted. The debate has a direct equivalent in the philosophy of history: when historians report the beliefs of historical figures, do they report the sentences or propositions that these historical figures believed to be true or false? In this paper I argue in favor of the latter, intentionalist, view. My arguments mostly center on the problems with translations that are likely to arise when a historian reports the beliefs of historical figures who expressed them in languages other than the one in which the historian is writing. In discussing these problems the paper presents an application of John Searle’s theory of intentionality on the philosophy of history. The debate between the view that all thinking is verbal and always in a language and the view that human beings think independently of any language (using their languages merely in order to express their thoughts) has had an extensive history in the philosophy of language for the past hundred years. It also has numerous implications for the philosophy of history, where the problem can be stated in general terms as the question of whether a historian, when reporting the beliefs of historical figures, reports the thought-­‐contents (conceived as independent of the language in which they were articulated) or the sentences that these people believed to be true or false. Among English-­‐speaking historians of philosophy, the latter view was promoted by Arthur Danto, the former by Quentin Skinner and Mark Bevir. Both positions are reflected in specific problems of history-­‐writing, such as, for instance, the question whether and how a historian can report the beliefs of historical figures who articulated them in languages different from the language in which the historian is writing. Both positions also fundamentally rely on the assumption that it is possible and legitimate to provide translations of sentences from one language to another when reporting the beliefs of historical figures; but, as we shall see, they are not on equal footing when it comes to explaining what counts as a legitimate translation. This paper explores the implications that these two views on the role of language in human thinking have for the philosophy of history. It will show that the view that all human thinking is verbal is not compatible with some fundamental and standard practices of history-­‐writing. Thus, the paper can be seen as a contribution to the debate about intentionalism in history-­‐writing. It argues in favor of the intentionalist approach by introducing new arguments derived from the philosophy of language, while at the same time proposing a formulation of the intentionalist position that relies on John Searle’s philosophical elaboration on the concept of intentionality.