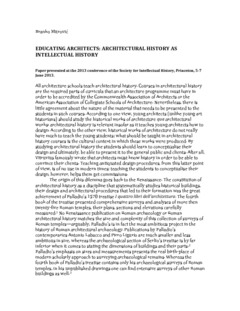 All architecture schools teach architectural history. Courses in architectural history are the required parts of curricula that an architecture programme must have in order to be accredited by the Commonwealth Association of Architects or the American Association of Collegiate Schools of Architecture. Nevertheless, there is little agreement about the nature of the material that needs to be presented to the students in such courses. According to one view, young architects (unlike young art historians) should study the historical works of architecture qua architectural works: architectural history is relevant insofar as it teaches young architects how to design. According to the other view, historical works of architecture do not really have much to teach the young students; what should be taught in architectural history courses is the cultural context in which these works were produced. By studying architectural history the students should learn to conceptualise their design and ultimately, be able to present it to the general public and clients. After all, Vitruvius famously wrote that architects must know history in order to be able to convince their clients. Teaching antiquated design procedures, from this latter point of view, is of no use in modern times; teaching the students to conceptualise their design, however, helps them get commissions. The origin of this dilemma goes back to the Renaissance. The constitution of architectural history as a discipline that systematically studies historical buildings, their design and architectural procedures that led to their formation was the great achievement of Palladio’s 1570 treatise quattro libri dell’architettura. The fourth book of the treatise presented comprehensive surveys and analyses of more then twenty-­‐five Roman temples, their plans, sections and elevations carefully measured. No Renaissance publication on Roman archaeology or Roman architectural history matches the size and complexity of this collection of surveys of Roman temples—arguably, Palladio’s is in fact the most ambitious project in the history of Roman architectural archaeology. Publications by Palladio’s contemporaries Antonio Labacco and Pirro Ligurio are much smaller and less ambitious in size, whereas the archaeological section of Serlio’s treatise is by far inferior when it comes to stating the dimensions of buildings and their parts. Palladio’s emphasis on sizes and measurements presents the real birth-­‐place of modern scholarly approach to surveying archaeological remains. Whereas the fourth book of Palladio’s treatise contains only his archaeological surveys of Roman temples, in his unpublished drawings one can find extensive surveys of other Roman buildings as well. Contrary to Palladio’s approach is Vasari’s discussion of lives, activities and motivation of great architects in the Vite. What Vasari described was ultimately the cultural context in which architectural works were created; he did not engage with the design procedures that yielded certain spatial or visual properties of architectural works.