Is a Capital Gains Tax the Answer to New Zealand's Tax Alchemy? 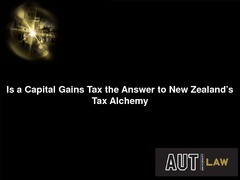 Unlike most OECD countries, including the United Kingdom and Australia, New Zealand has never implemented a realisation based capital gains tax (‘CGT’). Coupled with the fact that the New Zealand judiciary has steadfastly maintained the income/capital dichotomy, this has extended to certain taxpayers, most notably wealthier New Zealanders, the tax equivalent of alchemy. By making tax free capital gains from capital investments, such persons have truly struck gold! On 14 July 2011 the New Zealand Labour Party released its key tax policies for the then upcoming 2011 election. One of these policies included broadening the New Zealand tax base by introducing a CGT. Post the election, the Labour Party announced on 15 March 2012 that it will retain its plans for a CGT. The background to these announcements are the findings of a number of New Zealand Review Committees which have considered whether the New Zealand tax base should be so broadened by introducing a CGT. The McLeod Review 2001 Issues paper, for example, noted that CGT regimes “tend to be some of the most complex areas of tax law.” The Issues paper raised a number of design issues that lend to the complexity of a CGT, including: • identifying what constitutes an asset, noting that intangible property is particularly problematic; and • determining which methods of transferring full or partial economic ownership of an asset is a ‘realisation event’. Equally problematic is the identification of the acquisition of an asset. This paper looks at these three design features through a comparative analysis of the CGT regimes in the United Kingdom, Australia and South Africa. It concludes that there are many lessons New Zealand can learn from the CGT experiences of these three Nations.