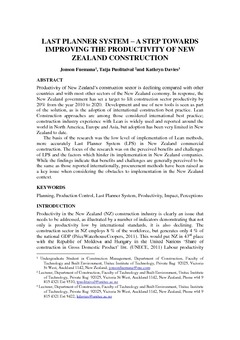 Productivity of New Zealand’s construction sector is declining compared with other countries and with most other sectors of the New Zealand economy. In response, the New Zealand government has set a target to lift construction sector productivity by 20% from the year 2010 to 2020. Development and use of new tools is seen as part of the solution, as is the adoption of international construction best practice. Lean Construction approaches are among those considered international best practice; construction industry experience with Lean is widely used and reported around the world in North America, Europe and Asia, but adoption has been very limited in New Zealand to date. The basis of the research was the low level of implementation of Lean methods, more accurately Last Planner System (LPS) in New Zealand commercial construction. The focus of the research was on the perceived benefits and challenges of LPS and the factors which hinder its implementation in New Zealand companies. While the findings indicate that benefits and challenges are generally perceived to be the same as those reported internationally, procurement methods have been raised as a key issue when considering the obstacles to implementation in the New Zealand context.