The impact of mega events on construction planning, processes and performance – Auckland’s experience of the Rugby World Cup 2011 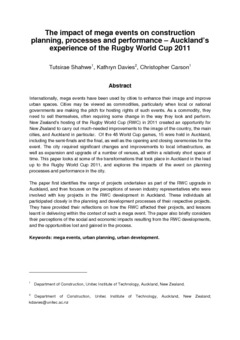 Internationally, mega events have been used by cities to enhance their image and improve urban spaces. Cities may be viewed as commodities, particularly when local or national governments are making the pitch for hosting rights of such events. As a commodity, they need to sell themselves, often requiring some change in the way they look and perform. New Zealand’s hosting of the Rugby World Cup (RWC) in 2011 created an opportunity for New Zealand to carry out much-needed improvements to the image of the country, the main cities, and Auckland in particular. Of the 48 World Cup games, 15 were held in Auckland, including the semi-finals and the final, as well as the opening and closing ceremonies for the event. The city required significant changes and improvements to local infrastructure, as well as expansion and upgrade of a number of venues, all within a relatively short space of time. This paper looks at some of the transformations that took place in Auckland in the lead up to the Rugby World Cup 2011, and explores the impacts of the event on planning processes and performance in the city. The paper first identifies the range of projects undertaken as part of the RWC upgrade in Auckland, and then focuses on the perceptions of seven industry representatives who were involved with key projects in the RWC development in Auckland. These individuals all participated closely in the planning and development processes of their respective projects. They have provided their reflections on how the RWC affected their projects, and lessons learnt in delivering within the context of such a mega event. The paper also briefly considers their perceptions of the social and economic impacts resulting from the RWC developments, and the opportunities lost and gained in the process.

International Council For Research And Innovation In Building And Construction (CIB)