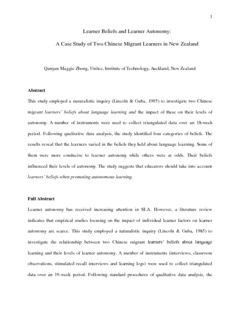 Learner autonomy has received increasing attention in SLA. However, a literature review indicates that empirical studies focusing on the impact of individual learner factors on learner autonomy are scarce. This study employed a naturalistic inquiry (Lincoln & Guba, 1985) to investigate the relationship between two Chinese migrant learners’ beliefs about language learning and their levels of learner autonomy. A number of instruments (interviews, classroom observations, stimulated recall interviews and learning logs) were used to collect triangulated data over an 18-week period. Following standard procedures of qualitative data analysis, the study identified four categories of learners’ beliefs. The results reveal that the learners varied in the beliefs they held about language learning. Some of them were more conducive to learner autonomy while others were at odds. Their beliefs influenced their levels of autonomy. The study suggests that educators should take into account learners’ beliefs when promoting autonomous learning. The paper concludes with some practical instructional recommendations.