All the suffering on our backs : rugby, religion and redemption amid the ruins 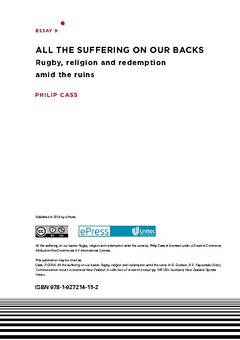 Cass, P. (2014). All the suffering on our backs: Rugby, religion and redemption amid the ruins. In G. Dodson, & E. Papoutsaki (Eds.), Communication issues in Aotearoa New Zealand: A collection of research essays (106-120). ePress Unitec. ISBN 9781927214152. [NOTE: to access individual papers, click on Author - title entries in the table of contents]. Retrieved from http://www.unitec.ac.nz/epress

New Zealand’s All Black rugby team is a national icon, an affirmation of the manly, self-reliant and resilient virtues which New Zealanders like to think they possess. In times of national peril, economic uncertainty and disaster they remain a pillar of certainty and inspiration, present in almost every television news bulletin and daily newspaper. At other times the All Blacks – whether current players or not - have also provided the media with a frame of reference for explaining significant international events to New Zealand audiences. In 2011 the All Blacks were used prominently to report on the Christchurch earthquake and the much greater seismic devastation experienced in Japan. However, as the Rugby World Cup approached both New Zealand and international media also began to invest the performance of rugby players with a quasi-religious expectation that they would somehow provide catharsis and healing for the earthquake victims in New Zealand and Japan. In doing so they reflected processes that had occurred elsewhere, notably in New Orleans after Cyclone Katrina, the 1995 Rugby World Cup in South Africa and London after the July 2007 terrorist attacks. Rugby has been described as a religion in New Zealand. It is certainly an obsession. Located on the fringes of the north Antarctic and exercising little global economic, political or military influence, New Zealand constantly seeks to mark a space for itself on the world stage through sport. Despite the success of its sportsmen and women in a variety of competitions, rugby remains the central, if not the driving force, in New Zealand sport and in its quest for global recognition. New Zealand’s national team, the All Blacks, is freighted with all sorts of social, cultural and quasi-political expectations.