The migrant and the media : maintaining cultural identity through ethnic media 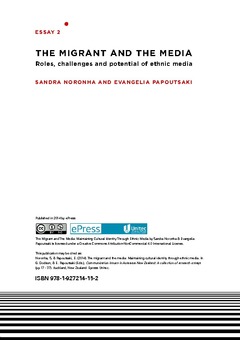 Evidence shows that mainstream media in New Zealand does not fully address the communication needs of these ethnic groups nor does it represent them in a balanced way (Robie, 2009). This is where ethnic, migrant, diaspora media play an important and supporting role by providing an alternative to an increasingly homogenised mainstream media. For ethnic communities, access to such media gives them an avenue to understand more clearly issues affecting their community, a stronger sense of identity and social cohesion and a connection to a perceived transnational community. While there is an increasing concern that mainstream media fails to reflect migrant issues and concerns, a plethora of migrant media exists in parallel that helps fill this gap (Williamson and DeSouza, 2006). Auckland alone has a vibrant ethnic media scene with media spread across print, radio, and web. Its strong Pacific Islands population, for instance, has created a lively media scene with a strong radio and online media presence contributing to the creation of a distinctive cultural diasporic identity (Papoutsaki and Strickland, 2008). With this background, this essay explores the function of different migrant media in New Zealand drawing examples from across the board with a particular focus on Indian media. This includes traditional media (i.e. print, TV, magazine, and radio), and online media. In this, the traditional communication networks of ethnic community and religious associations and their use of web, films and events is also taken into consideration. By exploring the role, challenges and potential of ethnic media, this essay seeks to understand how these media represent the diverse voices of migrant groups, in addition to providing content relevant to their needs as migrants (i.e. content that counterbalances the mainstream host culture as it is represented in the mainstream media).