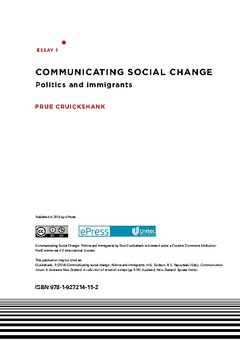 Immigration is a complex, dynamic global phenomenon which impacts irrevocably on both immigrants and the receiving society. Immigration policies, reflecting governments’ political and economic intentions, significantly influence successful immigration and settlement. Immigrants’ success in meeting governments’ and their own expectations are influenced by the political, economic, regulatory and social conditions of the host society they enter. Developing communication strategies to prepare a population for a change in immigration policies would be advantageous for social cohesion. However, the introduction of radical economic change intended to restructure business and society at the same time was not conducive to smooth, social immigrant integration. This paper explores the communication dimensions of an immigration policy set within the context of national political and economic restructuring. It does this by tracing the process and impact of the introduction of neo-liberal policies on New Zealand society without prior political debate. The economic and social consequences of neo-liberal reforms affected the reception and opportunities encountered by newly arrived business immigrants. To contextualise the discussion, the effects of neo-liberal policies on the New Zealand economy and society, including its immigrant communities, are traced from their inception in the 1980s through the 1990s. Introducing an economic and political change process which enables people to connect and participate, requires leaders who can articulate a vision to persuade people it is in their best interests to incorporate the change (Shockly-Zalabak, 2009). An opportunity for political debate on the impending neo-liberal changes arose during the 1994 New Zealand election campaign but was deliberately ignored (Jesson, 1999). An unexplained change in the social contract potentially creates a sense of betrayal and unfocused anger (D’Aprix, 1996). Subsequently, as the neo-liberal structural reforms were introduced, communities reacted in confusion, anger and scepticism.