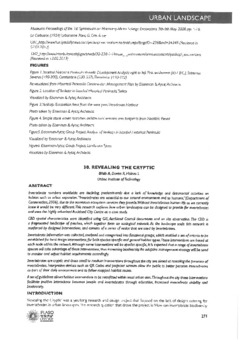 Invertebrate numbers worldwide are declining, predominantly due a lack of knowledge and detrimental activities on habitat such as urban expansion. "Invertebrates ore essential to our natural environment and to humans,"(Department of Conservation, 2006), due to the numerous ecosystem services they provide. Without invertebrates, human life as we currently know it would be very different This research explores how urban landscapes can be designed to provide for invertebrates and uses the highly urbanised Auckland City Centre as a case study. CBD spatial characteristics were identified using GIS,Auckland Council documents and on site observation. The CBD is a fragmented landscape of patches, which together form an ecological network. At the landscape scale this network is reinforced by designed interventions, and consists of a series of nodes that ore used by invertebrates. Invertebrate information was collected, analysed and categorised into functional groups, which enabled a set of criteria to be established for local design interventions, for both species specific and general habitat types.These interventions are based at each node within the network.Although some interventions will be species specific, it is expected that a range of invertebrate species will take advantage of these interventions, thus increasing biodiversity.An adaptive management strategy will be used to monitor and adjust habitat requirements accordingly. Invertebrates are cryptic and these small to medium interventions throughout the city are aimed at revealing the presence of invertebrates. Interpretive devices such as QR Codes and projector screens allow the public to better perceive invertebrates as part of their daily environment and to follow mapped habitat routes. A set of guidelines allows habitat interventions to be retrofitted within most urban sites.Throughout the city these interventions facilitate positive interactions between people and invertebrates through education, increased invertebrate visibility and biodiversity.