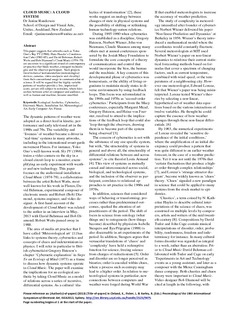 This paper suggests that artworks such as Yoko Ono’s Sky TV (1966), Hans Haacke’s Condensation Cube (1963-65), and David Behrman, Robert Watts and Bob Diamond’s Cloud Music (1974-79) are ancestors to a significant strand of contemporary art practice that binds weather, emergent technologies and the observer-participant. Such projects freed technical instrumentation (meteorological devices, cameras, video analysers and circuitry) from their conventional usage in communication or science. It will be argued that the highly variable patterns of weather provide a live, improvised score, yet are still subject to restraints, where hierarchies between artist or composer and audience, as well as human and machine, became unsettled.