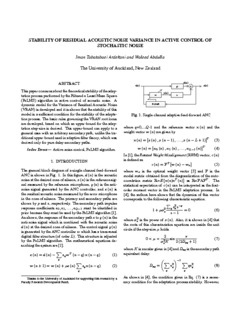 Ardekani, I. T., and Abdulla, W. H. (2013). Stability of residual acoustic noise variance in active control of stochastic noise. IEEE International Conference on Acoustics, Speech, and Signal Processing (ICASSP), Canada(Ed.). NOTE: This is research undertaken for the University of Auckland prior to the first author being affiliated with the Unitec Institute of Technology.

This paper concerns about the theoretical stability of the adaptation process performed by the Filtered-x Least Mean Square (FxLMS) algorithm in active control of acoustic noise. A dynamic model for the Variance of Residual Acoustic Noise (VRAN) is developed and it is shown that the stability of this model is a sufficient condition for the stability of the adaptation process. The basic rules governing the VRAN root locus are developed, based on which an upper-bound for the adaptation step-size is derived. This upper-bound can apply to a general case with an arbitrary secondary path, unlike the traditional upper-bound used in adaptive filter theory, which was derived only for pure delay secondary paths.

Institute of Electrical and Electronics Engineers