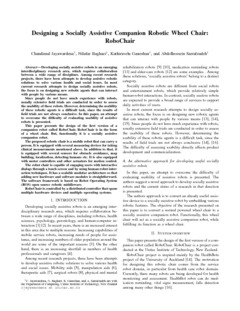 Developing socially assistive robots is an emerging interdisciplinary research area, which requires collaboration between a wide range of disciplines. Among recent research projects, there have been attempts to develop assistive robotic solutions to solve various health and social issues. In most current research attempts to design socially assistive robots, the focus is on designing new robotic agents that can interact with people by various means. Since people do not have much experience with robots, usually extensive field trials are conducted in order to assess the usability of these robots. However, determining the usability of these robotic agents is a difficult task, since the results of field trials are not always conclusive. In this paper, an attempt to overcome the difficulty of evaluating usability of assistive robots is presented. This paper presents the design of the first version of a companion robot called RoboChair. RoboChair is in the form of a wheel chair. But, functionally it is a socially assistive companion robot. The proposed robotic chair is a mobile robot that can carry a person. It is equipped with several measuring devices for taking clinical measurements mentioned above. In addition to that, it is equipped with several sensors for obstacle avoidance, map building, localization, detecting humans etc. It is also equipped with motor controllers and other actuators for motion control. The robot chair is capable of engaging users with interactive dialogs through a touch screen and by using human-robot interaction techniques. It has a scalable modular architecture so that adding new hardware and software modules is straightforward. The software framework is based on Robot Operating System (ROS) open source robotic middleware. RoboChair is controlled by a distributed controller that spans multiple hardware devices and multiple operating systems.