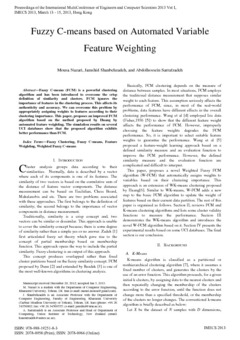 Fuzzy C-means (FCM) is a powerful clustering algorithm and has been introduced to overcome the crisp definition of similarity and clusters. FCM ignores the importance of features in the clustering process. This affects its authenticity and accuracy. We can overcome this problem by appropriately assigning weights to features according to their clustering importance. This paper, proposes an improved FCM algorithm based on the method proposed by Huang by automated feature weighting. The simulation results on several UCI databases show that the proposed algorithm exhibits better performance than FCM.