Resilient cities : the proposition of the convergence of individual and community resilience 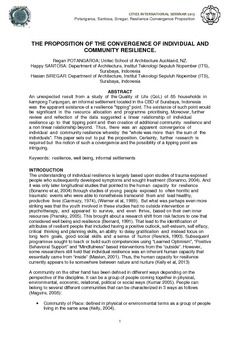 Potangaroa, R., Santosa , H., and Siregar, H. (2013). The Proposition of the Convergence of Individual and Community Reslilience. Cities 2013 International Seminar: Resilient Cities Beyond Mitigation, Preparedness, Response and Recovery(Ed.), October 8-9 2013 Surabaya hosetd by the ITS University Dept of Planning and QUT Brisbane.

An unexpected result from a study of the Quality of Life (QoL) of 85 households in kampong Tunjungan, an informal settlement located in the CBD of Surabaya, Indonesia was the apparent existence of a resilience "tipping" point. The existence of such point be significant in the resource allocation and program prioritising. Moreover, further review and reflection of the data suggested a linear resilience up to that tipping point and then creation of additional community resilience a non linear relationship beyond. Thus, there was an apparent convergence of individual and community resilience whereby "whole was more than the sum of the individuals". This paper sets out to put the proposition. Certainly, further research is required but the notion of such a convergence and the possibility of a tipping point are intriguing.

1699 Other Studies in Human Society