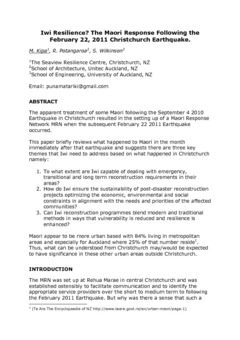 The apparent treatment of some Maori following the September 4 2010 Earthquake in Christchurch resulted in the setting up of a Maori Response Network MRN when the subsequent February 22 2011 Earthquake occurred. This paper briefly reviews what happened to Maori in the month immediately after that earthquake and suggests there are three key themes that Iwi need to address based on what happened in Christchurch namely: 1. To what extent are Iwi capable of dealing with emergency, transitional and long term reconstruction requirements in their areas? 2. How do Iwi ensure the sustainability of post-disaster reconstruction projects optimizing the economic, environmental and social constraints in alignment with the needs and priorities of the affected communities? 3. Can Iwi reconstruction programmes blend modern and traditional methods in ways that vulnerability is reduced and resilience is enhanced? Maori appear to be more urban based with 84% living in metropolitan areas and especially for Auckland where 25% of that number reside. Thus, what can be understood from Christchurch may/would be expected to have significance in these other urban areas outside Christchurch.