Towards Assessment Transparency: Following on from 'The Crit', can a student's learning be enhanced by allowing them to witness their own formative and summative assessment event? 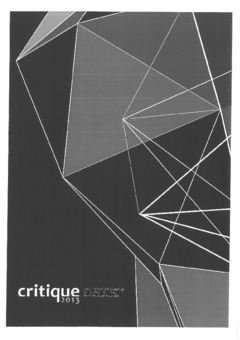 Rennie, JJ. (2013). Towards Assessment Transparency: Following on from 'The Crit', can a student's learning be enhanced by allowing them to witness their own formative and summative assessment event?. In C. Brisbin & M. Thiessen (Eds.) Critique Conference Proceedings, 295-305.

The Design school critique: the Crit, remains a unique event, not only in the display and discussion generated by the student responses to the same Brief, but also from the airing of many and varied opinions of all present that has been provoked by the pinned up work. The Crit itself may need some tweaking to reduce confrontation and encourage participation by all those present at such an assembly, it however remains vital to the culture of the Design School. Although this paper has not dealt directly with the mech­anisms of the Crit itself and ways in which it could be given a facelift, it does attempt to question the result of the Crit : namely the summative and formative feedback aspects that follow it. It attempts to promote a more transparent and less confronting aspect to the assessment component of the process, in the hope of promoting further student learnings. The meaning of Critique is a review or assessment of somebody's work. Yet 'students can, with difficulty, escape from the effects of poor teaching, they cannot, (by defini­tion, if they want to graduate), escape the effects of poor assessment.' Until Tertiary Education facilities switch to formative assessment only, this eavesdropping type field trial shows the positive affects that transparency can bring during the assessment process. It not only affects tutor behaviour for the better, it allows the student private yet direct access to positive feedback comments about their work and themselves. These witnessed comments could in turn activate deep learning and foster critical thinking within the student. However, this was a small sample of respondents, so the paper's intention at this time is to expose this idea to the wider Design School profession and apply for funding within the Faculty to do a similar field trials with larger sample pools, in the hope of building upon this experiment in student assessment and learning transparency. As interviewed and quoted by Anthony, 'Architect: Charles Moore says: 'One of the lega­cies of the Beaux-Arts that we still have with us is that secrecy, the business of retiring into a room where nobody could see what you were doing...To keep people from copying each other is presumably why this secrecy was set up. Yet so much of [design] practice is indeed copying each other, building on each other's ideas, and keeping other people interested in what'sgoing on.' This paper attempts to show how a student learner can be like a fly on the wall for a time, inside that room, and potentially glean something meaningful about themselves, their work, their potential, and something more about the Design process by making their own assessment and feedback event more transparent.