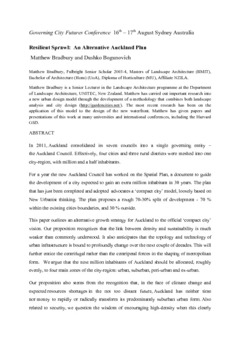 In 2011, Auckland consolidated its seven councils into a single governing entity – the Auckland Council. Effectively, four cities and three rural districts were meshed into one city-region, with million and a half inhabitants. For a year the new Auckland Council has worked on the Spatial Plan, a document to guide the development of a city expected to gain an extra million inhabitant in 30 years. The plan that has just been completed and adopted advocates a ‘compact city’ model, loosely based on New Urbanist thinking. The plan proposes a rough 70-30% split of development - 70 % within the existing cities boundaries, and 30 % outside. This paper outlines an alternative growth strategy for Auckland to the official ‘compact city’ vision. Our proposition recognizes that the link between density and sustainability is much weaker than commonly understood. It also anticipates that the topology and technology of urban infrastructure is bound to profoundly change over the next couple of decades. This will further entice the centrifugal rather than the centripetal forces in the shaping of metropolitan form. We argue that the next million inhabitants of Auckland should be allocated, roughly evenly, to four main zones of the city-region: urban, suburban, peri-urban and ex-urban. Our proposition also stems from the recognition that, in the face of climate change and expected resources shortages in the not too distant future, Auckland has neither time nor money to rapidly or radically transform its predominantly suburban urban form. Also related to security, we question the wisdom of encouraging high-density when this clearly carries significant risk for a city founded on a very precarious natural site (volcanoes; earthquakes; tsunamis).