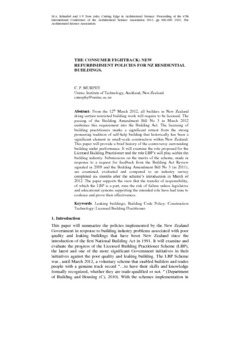 From the 12th March 2012, all builders in New Zealand doing certain restricted building work will require to be licensed. The passing of the Building Amendment Bill No 3 in March 2012 enshrines this requirement into the Building Act. The licensing of building practitioners marks a significant retreat from the strong pioneering tradition of self-help building that historically has been a significant element in small-scale construction within New Zealand. This paper will provide a brief history of the controversy surrounding building under performance. It will examine the role proposed for the Licensed Building Practitioner and the role LBP’s will play within the building industry. Submissions on the merits of the scheme, made in response to a request for feedback from the Building Act Review signaled in 2009 and the Building Amendment Bill No 3 (in 2011), are examined, evaluated and compared to an industry survey completed six months after the scheme’s introduction in March of 2012. The paper supports the view that the transfer of responsibility, of which the LBP is a part, runs the risk of failure unless legislative and educational systems supporting the intended role have had time to coalesce and prove their effectiveness.