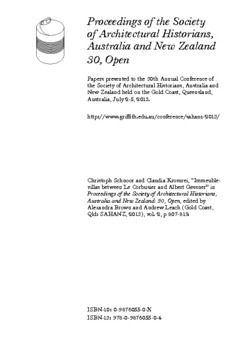 One of the open questions for contemporary urban living in the city is the issue of density. What level of urban density is sustainable and appropriate for a healthy, enjoyable lifestyle as well as for the unfolding of public life? If in Brisbane or in Auckland, the predominant models are either the high-rise apartment building or the detached suburban house. Solutions may lie in the vast zone between these two extremes. One such alternative model is Le Corbusier’s notion of Immeuble villas of 1925.((tenement house of villas) Despite its age of nearly a hundred years it is not outdated; nonetheless it has rarely been given sufficient attention by practitioners and historians. Le Corbusier’s term of the Immeuble villas should not simply be reduced to its one built manifestation as Pavillon de l’Esprit Nouveau, exhibited at the Exposition Internationale des Arts Décoratifs in Paris in 1925. This term rather encompasses a principle of urban living for which a number of architects found architectural expression at the beginning of the twentieth century, not so much in taking Le Corbusier’s idea as precedent but rather in fundamental concurrence of the idea and the underlying principle of the Immeuble villas. One such architect was Albert Gessner, a prominent architect in Berlin of the early 1900s. Throughout his career he devoted his attention primarily towards the urban tenement block. Instead of Le Corbusier’s interest in type and standardization, Gessner valued individuality within the standardized model of the urban block. This paper traces various manifestations of the Immeuble Villas in the first half of the twentieth century— for example Milan’s Domus Fausta, Carola and Julia by Gio Ponti and Emilio Lancia, Michel Roux Spitz’ houses in Paris and Charles Abella’s house at the Avenue Foch in Paris. In doing so, the paper explores the underlying architectural principles of this overlooked hybrid typology, using Gessner’s and Le Corbusier’s contrasting methods as point of departure.