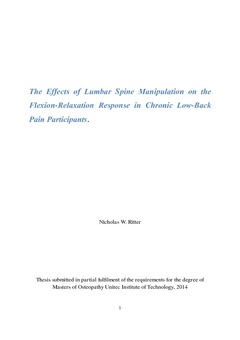 Ritter, N.W. (2014). The effects of lumbar spine manipulation on the flexion-relaxation response in chronic low-back pain participants. An unpublished thesis submitted in partial fulfilment of the requirements for the degree of Masters of Osteopathy, Unitec Institute of Technology.

High-velocity spinal manipulation continues to gain popularity as treatment for chronic low-back pain (CLBP). The aim of this study was to investigate the effects of high-velocity spinal manipulation on the flexion-relaxation (FR) response, ROM and VAS. Ten CLBP participants under counter-balanced cross-over design were randomised into manipulation or control groups for either a non-specific bilateral high-velocity manipulation or 30 s side-lying. FR values, finger-floor distance measures and pain perception (100mm VAS) were recorded immediately before and after the intervention. ROM was controlled during pre-measure FR tasks to individual finger-floor distance values recorded at baseline. Post intervention and control measures removed ROM control and were then compared against pre-measure values to evaluate neuro-muscular changes associated to the intervention. Repeated-measures two-way ANOVA revealed a significant (p<0.001) effect for ROM and VAS for both the control and intervention groups. No changes were observed for FR, despite changes in VAS. CONCLUSION: This study shows that there appears to be a temporal asymmetry between restoration of function and pain cessation. Observations in delayed muscle function have been reported in experimental pain research following pain cessation. These findings warrant further investigation to better understand the mechanisms associated to pain, muscle function and spinal manipulation.