Improving network performance : an evaluation of TCP/UDP on networks 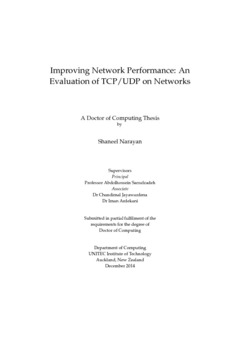 Narayan, S. (2014) Improving Network Performance: An Evaluation of TCP/UDP on Networks. An unpublished Doctor of Computing Thesis. Submitted in partial fulfilment of the requirements for the degree of Doctor of Computing, Unitec Institute of Technology.

Computer networks are complex - they are a heterogeneous environment in which numerous services, such as electronic mail, web browsing, voice and multimedia data, traverse the globe daily. The needs and demands of end users continuously change, and to meet these, new technologies are being incorporated into this mega digital infrastructure at a phenomenal rate. In addition to ensuring that necessary functionalities are provided, it is vitally important to ensure that network performance is always at its optimum. Fundamentally, networks are an environment where data, mostly in the form of TCP and UDP, are being propagated end-to-end between the sending and receiving nodes. There are numerous avenues of network performance that can be exploited in order to improve its performance. Research in this area is multi-faceted, and in this thesis the focus is on evaluating the behaviour of TCP and UDP end-to-end on networks in three scenarios, namely, networks with transition mechanisms, wireless based networks, and in the context of using virtual private network technologies as security protocols. This thesis will give insights into the behaviour of common protocols on real networks. Therefore, performance metrics related to networks have been gathered from test-bed implementations. The collected data has been presented in graphs and heat maps, which have been evaluated to ascertain network related characteristics. In particular, key metrics have been identified, networking techniques within each context have been ranked, specific observations related to each network environment have been made, and finally, the impact of either version of the Internet Protocol or an operating system has been evaluated.