Validating the use of a carbon dioxide laser for assessing nociceptive thresholds in adult domestic cats (Felis catus). 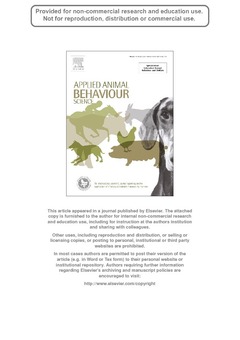 Thermal sensitivity in cats has historically been assessed using complex devices which require direct application to the patient and can therefore, in themselves, affect the measurement. This study aimed to validate the use of a remote low power (165 mW) carbon dioxide laser device for the assessment of thermal nociceptive thresholds in cats. Repeatabilites were established based on individual responses to three thermal tests on the same day and across 4 consecutive days. A total of 12 thermal tests were conducted on each of eight male and eight female de-sexed adult cats. As a control a non-thermal helium aiming laser was used to ensure the animals were responding to the thermal component of the device. All thermal tests elicited a behavioural response with the large majority being a skin twitch known as the panniculus reflex (97%). None of the non-thermal tests resulted in this reflex behaviour. There was no evidence that cats became sensitised or habituated to the low power thermal stimulus on any given day (P = 0.426) or across days (P = 0.115), or that there was any interaction between the two time factors (P = 0.084). There was also no difference in latency to respond between males and females (P = 0.094), although there was a significant interaction between the day of testing and the sex of the subject (P = 0.042). Significant intra-class correlations demonstrated that individual responses were repeatable over days 1–3 (all P < 0.05) but not over day 4 (P = 0.096). A significant intra-class correlation was also evident across all days when data were combined (P < 0.0001). This technique shows some promise in assessing individual nociceptive thresholds and as a tool to establish associated individual differences. It could, with more exploration, also provide an alternative thermal mechanism for testing the efficacy of analgesics in cats. The significant repeatabilities were low ranging from 0.241 to 0.414, this suggests that a number of extraneous factors may have influenced responses to CO2 laser stimulation at low power levels (165 mW). Further exploration of this technique on a larger sample than used here may allow elucidation of any other factors, including age or sex effects, that impact upon thermal sensitivity in the domestic cat.

Provided for non-commercial research and education use. Not for reproduction, distribution or commercial use. This article appeared in a journal published by Elsevier. The attached copy is furnished to the author for internal non-commercial research and education use, including for instruction at the authors institution and sharing with colleagues. Other uses, including reproduction and distribution, or selling or licensing copies, or posting to personal, institutional or third party websites are prohibited. In most cases authors are permitted to post their version of the article (e.g. in Word or Tex form) to their personal website or institutional repository.