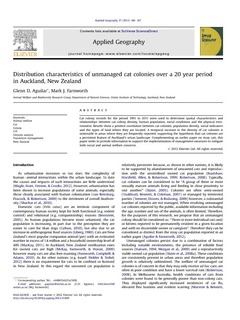 Cat colony records for the period 1991 to 2011 were used to determine spatial characteristics and relationships between cat colony density, human population, social conditions and the physical environment. Results show a positive correlation between cat colonies, population density, social indicators and the types of land where they are located. A temporal increase in the density of cat colonies is noticeable in areas where they are frequently reported, supporting the hypothesis that cat colonies are a persistent feature of Auckland’s urban landscape. Complementing an earlier paper on stray cats, this paper seeks to provide information to support the implementation of management measures to mitigate both social and animal welfare concerns.