Attitudes towards catch-and-release recreational angling, angling practices and perceptions of pain and welfare in fish in New Zealand. 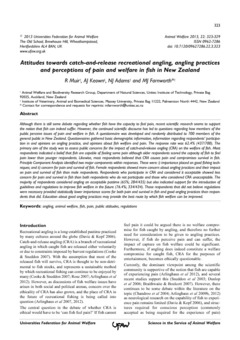 Although there is still some debate regarding whether fish have the capacity to feel pain, recent scientific research seems to support the notion that fish can indeed suffer. However, the continued scientific discourse has led to questions regarding how members of the public perceive issues of pain and welfare in fish. A questionnaire was developed and randomly distributed to 700 members of the general public in New Zealand. Questionnaires gathered basic demographic information, information regarding respondents’ participation in and opinions on angling practice, and opinions about fish welfare and pain. The response rate was 62.4% (437/700). The primary aim of the study was to assess public concerns for the impact of catch-and-release angling (CRA) on the welfare of fish. Most respondents indicated a belief that fish are capable of feeling some pain although older respondents scored the capacity of fish to feel pain lower than younger respondents. Likewise, most respondents believed that CRA causes pain and compromises survival in fish. Principle Component Analysis identified two major components within responses. These were: i) importance placed on good fishing techniques; and ii) concern for pain and survival of fish. Female respondents showed more concern about angling practices and their impact on pain and survival of fish than male respondents. Respondents who participate in CRA and considered it acceptable showed less concern for pain and survival in fish than both respondents who do not participate and those who considered CRA unacceptable. The majority of respondents considered angling an acceptable pastime (65%; 284/435) but also indicated support for the introduction of guidelines and regulations to improve fish welfare in the future (76.4%; 334/434). Those respondents that did not believe regulations were necessary provided statistically lower importance scores for both pain and survival in fish and good angling practices than respondents that did. Education about good angling practices may provide the best route by which fish welfare can be improved.