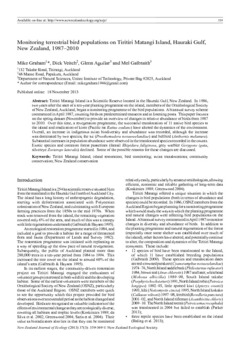 Tiritiri Matangi Island is a Scientific Reserve located in the Hauraki Gulf, New Zealand. In 1986, two years after the start of a ten-year planting programme on the island, members of the Ornithological Society of New Zealand, Auckland, began a monitoring programme of the bird populations. A biannual survey scheme commenced in April 1987, counting birds on predetermined transects and at listening posts. This paper focuses on the spring dataset (November) to provide an overview of changes in relative abundance of birds from 1987 to 2010. Over this time, a revegetation programme, the successful translocation of 11 native bird species to the island and eradication of kiore (Pacific rat Rattus exulans) have altered the dynamics of the environment. Overall, an increase in indigenous avian biodiversity and abundance was recorded, although the increase was dominated by two species, the tui (Prosthemadera novaeseelandiae) and bellbird (Anthornis melanura). Substantial increases in population abundance were observed in the translocated species recorded in the counts. Exotic species and common forest passerines (fantail Rhipidura fuliginosa, grey warbler Gerygone igata, silvereye Zosterops lateralis) declined. Some of the possible reasons for these changes are discussed.