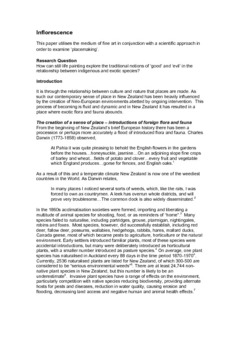 This paper utilises the medium of fine art in conjunction with a scientific approach in order to examine ‘placemaking’. It is through the relationship between culture and nature that places are made. As such our contemporary sense of place in New Zealand has been heavily influenced by the creation of Neo-European environments abetted by ongoing intervention. This process of becoming is fluid and dynamic and in New Zealand it has resulted in a place where exotic flora and fauna abounds. The paintings The five paintings, that form part of this investigation, focus on colonisation, in particular the intersection of exotic and native species. A number of specific relationships, some parasitic others commensalistic or mutualistic are depicted in order to tease out this notion of friend or foe. What is revealed are a number of unexpected and paradoxical relationships that challenge traditional assumptions of good and evil.