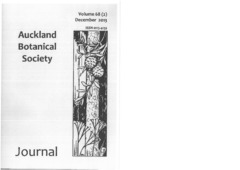 Dingle Dell Reserve in St Heliers, Auckland, is an Auckland Council reserve of 9 ha. It is popular for walking, a venue for outdoor concerts, it protects the headwaters of a stream draining into the sea at St Heliers Bay via an underground pipe down Dingle Road and the Parade, and is an ecologically significant fragment of urban forest. ... Concluding remarks Dingle Dell has a surprisingly rich flora considering it was once a rather degraded fragment of native vegetation, and has been artificially enriched by planting of native and exotic trees. Its main ecological interest is now on the future development of the native flora and vegetation. Mosses, liverworts and lichens are plentiful. So far there has been little natural regeneration of any of the native conifers planted there 50-60 years ago. However, seedlings and saplings can be found of broadleaf trees such as puriri, karaka, taraire and kohekohe, and also nikau, so these are likely to predominate in the future. The ancient kanuka and cabbage trees exhibit declining health, but beneath them is a dense scrub forest of small trees such as lacebark, mapou and houpara. The rather open nature of much of the vegetation exposes the upper slopes wind and drought, where hardy plants such as Gahnia lacera, Doodia australis and Adiantum hispidulum provide the main ground cover.