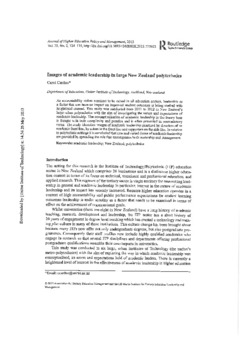 As accountability stakes continue to be raised in all education sectors, leadership as a factor that can have an impact on improved student outcomes is being studied with heightened interest. This study was conducted from 2011 to 2012 in New Zealand's large urban polytechnics with the aim of investigating the nature and expectations of academic leadership. The conceptualisation of academic leadership in the theory base is fraught with both complexity and paradox and is often presented in contradictory terms. The study identifies images of academic leadership practised by directors of an academic front line, by actors in the front line and supporters on the side line. In relation to polytechnic settings it is concluded that new and varied forms of academic leadership are provided by spreading the role that encompasses both leadership and management.