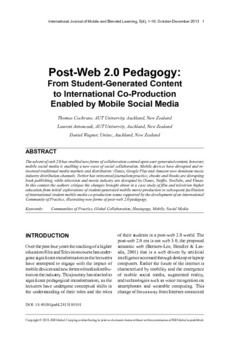 The advent of web 2.0 has enabled new forms of collaboration centred upon user-generated content, however, mobile social media is enabling a new wave of social collaboration. Mobile devices have disrupted and reinvented traditional media markets and distribution: iTunes, Google Play and Amazon now dominate music industry distribution channels, Twitter has reinvented journalism practice, ebooks and ibooks are disrupting book publishing, while television and movie industry are disrupted by iTunes, Netflix, YouTube, and Vimeo. In this context the authors critique the changes brought about in a case study of film and television higher education from initial explorations of student-generated mobile movie production to subsequent facilitation of international student mobile media co-production teams supported by the development of an international Community of Practice, illustrating new forms of post-web 2.0 pedagogy.