On the stochastic modeling and analysis of FxLMS adaptation algorithm 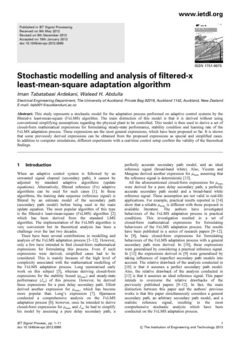 This study represents a stochastic model for the adaptation process performed on adaptive control systems by the filtered-x least-mean-square (FxLMS) algorithm. The main distinction of this model is that it is derived without using conventional simplifying assumptions regarding the physical plant to be controlled. This model is then used to derive a set of closed-form mathematical expressions for formulating steady-state performance, stability condition and learning rate of the FxLMS adaptation process. These expressions are the most general expressions, which have been proposed so far. It is shown that some previously derived expressions can be obtained from the proposed expressions as special and simplified cases. In addition to computer simulations, different experiments with a real-time control setup confirm the validity of the theoretical findings.

The Institution of Engineering and Technology