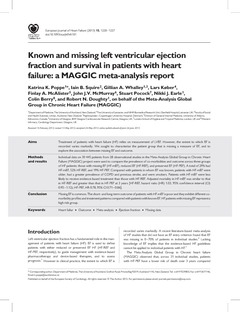 Aims Treatment of patients with heart failure (HF) relies on measurement of LVEF. However, the extent to which EF isrecorded varies markedly. We sought to characterize the patient group that is missing a measure of EF, and toexplore the association between missing EF and outcome.Methodsand resultsIndividual data on 30 445 patients from 28 observational studies in the Meta-Analysis Global Group in Chronic HeartFailure (MAGGIC) project were used to compare the prevalence of co-morbidities and outcome across three groupsof HF patients: those with missing EF (HF-mEF), reduced EF (HF-REF), and preserved EF (HF-PEF). A total of 29% hadHF-mEF, 52% HF-REF, and 19% HF-PEF. Compared with patients in whom EF was known, patients with HF-mEF wereolder, had a greater prevalence of COPD and previous stroke, and were smokers. Patients with HF-mEF were lesslikely to receive evidence-based treatment than those with HF-REF. Adjusted mortality in HF-mEF was similar to thatin HF-REF and greater than that in HF-PEF at 3 years [HF-REF, hazard ratio (HR) 1.03, 95% conﬁdence interval (CI)0.95–1.12); HF-PEF, HR 0.78, 95% CI 0.71–0.86].Conclusion Missing EF is common. The short- and long-term outcome of patients with HF-mEF is poor and they exhibit different co-morbidity proﬁles and treatment patterns compared with patients with known EF. HF patients with missing EF represent ahigh risk group.